I know it's been a long time since I posted anything here, but if anyone's checking in on me, things are still rolling. I'm shopping around the next Boot Hill book to a couple different publishers, so we'll see what comes of that.

Also, I'm going to be at the Western Writer's Conference in Knoxville, TN on the weekend of June 25th - 27th. I'm not on any panels or anything, but I'll be around. Hope to see some of you there.
Posted by Marcus at 10:36 PM 2 comments:

Today was the Omaha Literary Festival. It was a great time and thank you very kindly to all of you who showed up! Even with a Cornhuskers game on at the same time as the panels, there was still a pretty good turn out. One thing that I thought was really interesting was the variety of folks on the panel itself. Apart from me, there was an author with a book set in the west during more modern day and based on factual events, plus a professor at UNL who writes about the west from a Mexican-American perspective. Between the three of us, we covered a lot of ground.

And kudos to the moderator, as well. All too often, moderators at panels either don't want the job or just plain don't do their job by just letting the conversation drift where it will or stall out completely. Not so this time. Although, he did introduce my first series as "The Man From Book Hill". Eh, no hard feelings. I gotta grouse about something. Seriously, great job all around and I hope to return next time!
Posted by Marcus at 1:23 AM No comments:

With my head down and working on my own schedule, it's easy to forget what day of the week it is. I barely thought about it being September until I saw all the back to school stuff (which is mostly late August anyway, so that shows how on-point I am). There's so much that comes along with this, but most of it is personal and tough to express. Also, most of it doesn't need to be expressed because it's the same thing that most of us feel when we think of 9/11/01.

My big memory involves standing in line all day long to give blood. I was living in St. Louis and after I saw what happened, the news affiliates were predicting the Red Cross would need as much blood as possible to help the victims. This was while things were still happening, so they didn't know for certain whether anyone needed extra donations or not. That was the only thing I could do at the time, so I went to give. I'd never given blood before but I had to do something. When I got there, most of the city seemed to be lined up so they could do something too. I waited in that line all day long and honestly don't even know what they did with all that blood. There had to have been way more than what they (or all of the local Red Crosses) needed, but it was moving to be there and witness the entire country bleeding for our loss.

I don't appreciate being told to "never forget" as if I COULD forget. I'm also not one to feel more emotional about something because the calendar tells me to. Seeing the towers fall impacted me along with everybody else and I won't forget about it come September 14th or March 27th. Still, it is good to see everyone bleed for a good cause.
Posted by Marcus at 12:37 PM No comments:

The Omaha Literary Festival is coming up on the 19th. My panel is “Wild: mythmaking and the American West,” and it will be held at 4 pm. Dave Mullins, author of the Las Vegas-set story collection, “True Love Versus the Cigar Store Indian,” will moderate. If any of you can make it, I'd love to see you there. Otherwise, it'll be me and a few other folks at a table talking to each other and nobody else. While that's not uncommon with these things, it's always better with an audience. Hope to see some of you there!
Posted by Marcus at 2:31 PM No comments:

I've just recently confirmed that I'll be appearing at the Omaha Literary Festival on September 19. It'll be held in, you guessed it, Omaha, NE. If you're in the area, stop by and you shouldn't be disappointed. There will be plenty of writers from the western and other genres giving talks and (hopefully) signing some books. Here's a link to a website with some details. Hope to see you there!

Until then, I'll be working on a new Ralph Compton book. Feels good to climb into the saddle again.
Posted by Marcus at 2:59 PM No comments:

Too early to tell 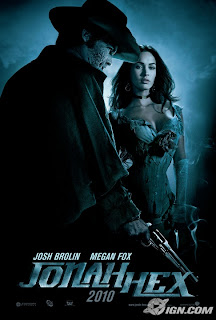 Don't quite know what to make of this one yet. A Jonah Hex movie could be amazing or it could just be a schlocky attempt to put Megan Fox into another tight dress. Not that I'm opposed to that sort of thing, but Jonah Hex deserves something more than that.
I'm still reading the comic books and enjoying them immensely. I've kind of fallen out of love with The Man With No Name series just because it seems a bit too convoluted for its own good. Haven't given up on it completely yet, but the next few issues better be good.
I'd like to see a new Ghost Rider series set in the old west. Say what you want about the Nick Cage movie, but that one scene where he was riding alongside Sam Elliott's dead horse was one hell of a cool visual. Give me some demon banditos and I'll be a happy guy.
Posted by Marcus at 1:10 AM No comments:

Gary Dobbs did a great interview with yours truly over on his Tainted Archive blog. Here's the link: http://tainted-archive.blogspot.com/2009/07/i-always-wanted-to-wear-black-hat.html

There were some really good questions that got me rambling about subjects ranging from the Clint vs. Duke debate all the way up to the state of the western genre. Go see for yourself, because that's all you're getting from me.
Posted by Marcus at 11:49 AM 3 comments: